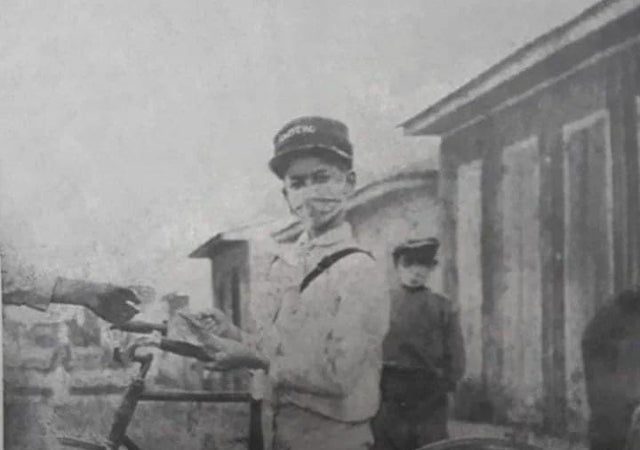 Many of the methods Americans used in 1918 to try to prevent the spread of the flu are similar to what began doing during the COVID-19 pandemic: Close schools. Wear masks. Don’t cough or sneeze in someone’s face. Avoid large events and hold them outside when possible. And no spitting.

Health and city officials got the word out about these guidelines in all kinds of ways. In Philadelphia, streetcar signs warned “Spit Spreads Death.” In New York City, officials enforced no-spitting ordinances and encouraged residents to cough or sneeze into handkerchiefs (a practice that caught on after the pandemic). The city’s health department even advised people not to kiss “except through a handkerchief,” and wire reports spread the message around the country.

In western states, some cities adopted mask ordinances, and officials argued wearing one was a patriotic duty. In October 1918, the San Francisco Chronicle ran a public service announcement telling readers that “The man or woman or child who will not wear a mask now is a dangerous slacker”—a reference to the type of World War I “slacker” who didn’t help the war effort. One sign in California threatened, “Wear a Mask or Go to Jail.”

The Dominican Republic did not escape the reality that existed at that time. On the website www.reddit.com, the photograph of the future lawyer Dámaso Antonio Guzmán López (founder of the Guzmán Ariza office) in Salcedo in 1918 was published, who, at 12 years of age and wearing a postman uniform, also wore a mask as a preventive measure during the influenza pandemic that affected the Dominican Republic between 1918 and 1919 and then infected 10% of the population.

The US military government of occupation issued multiple health regulations and a Health Law in 1919 and took restrictive measures for internal, maritime and border circulation, which, however, did not prevent the death of 1,654 people and the contagion of another 96,828.