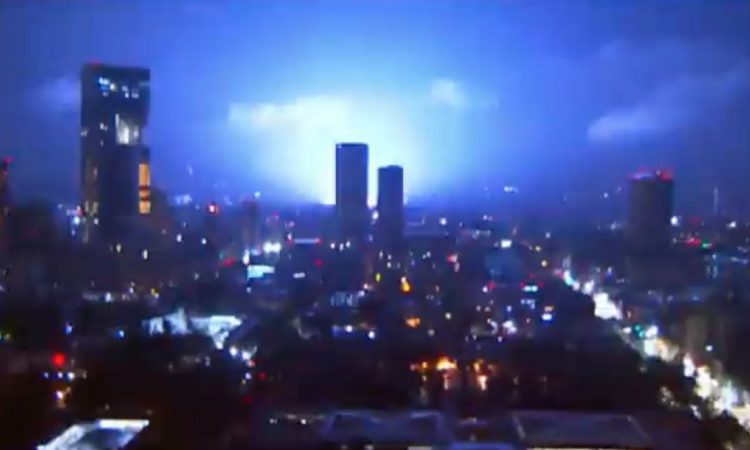 The earthquake originated 14 kilometers from Acapulco, in the state of Guerrero, and left at least one dead and 1.6 million people without electricity. The earthquake was of the same magnitude as that of the 2017 tragedy.

A 7.1 magnitude earthquake shook central Mexico on Tuesday night, leaving one dead so far and 1.6 million people without electricity. The earthquake occurred at 8:47 p.m. local time (seven hours more in mainland Spain) originating 14 kilometers southeast of Acapulco, in the state of Guerrero. Shortly before ten o’clock at night, the president of Mexico, Andrés Manuel López Obrador, affirmed: “Fortunately, there is no serious damage.” Half an hour later, the governor of Guerrero, Héctor Astudillo, reported that there had been a fatality in the municipality of Coyuca de Benítez.

After midnight, the Federal Electricity Commission, CFE, has reported that the electricity service returns to normal little by little. The earthquake was registered on the anniversary of the 8.2 magnitude earthquake that caused a hundred deaths in Oaxaca in 2017. Twelve days later, on September 19, another earthquake, this one measuring 7.1, shook the capital of Mexico, causing the death of more than 350 people.

Astudillo explained to the local media that the deceased person was crushed by a pole that fell during the earthquake in a town 50 kilometers north of Acapulco. The civil authorities of Guerrero continue to carry out a review of the affected areas, and have warned of landslides on the highways. “We are attentive to their recommendations and pending in case there are aftershocks,” the governor has warned.

“We are doing a very quick review. At the moment, in the Acapulco area it has generated a lot of alert, but nothing serious ”, he added. In some coastal areas of the state, in the southwest of the country, images of cars crushed by beams have been seen. Adela Román, the mayor of Acapulco, has said on the Forum 4 channel that no major damage was recorded, only “blackouts and gasoline leaks that are being addressed.”

López Obrador has said, through a message spread on social networks: “Fortunately there is no major damage. Stones, falls from fences. As in Morelos, there is no damage in Oaxaca, in Puebla, there is no serious damage in Mexico City.

General Sandoval, Secretary of Defense, has made a review in all the military zones ”. The earthquake of this Tuesday revived for long minutes the fears of a country that, due to its history, remains alert every September. Some people in the capital even suffered nervous breakdowns and had to be treated by medical services.

The Department of Civil Protection of the Government of Mexico has examined the situation in the different states of the country. According to his report, in Guerrero the earthquake protocols were activated: evacuation of buildings and hotels. The states of Querétaro, Veracruz, Tlaxcala and Puebla began the inspection tours of the buildings. The head of Government of Mexico City, Claudia Sheinbaum, published a video on social networks where she announced the activation of security protocols.

“Three overflights have been made and no damage has been found. I just spoke with the president and gave him this information. We know that there are many places without electricity, I ask everyone for peace of mind, ”she said. The Federal Electricity Commission reported that 1.6 million people in Morelos, Oaxaca, the State of Mexico and Mexico City were affected by power outages.

Neighbors from different neighborhoods in the Mexican capital notified the authorities about possible gas leaks, complaints that have been addressed by firefighters. A man who resides in the Roma Sur neighborhood commented to this newspaper that on Tehuantepec Street they were checking some buildings for possible leaks.

In some parts of the city, telephone and internet service cuts were recorded and traffic lights went out. Myriam Urzúa, the secretary for Comprehensive Risk Management, has announced that there are three mayors (the administrative divisions in which Mexico City is organized) with partial power outages, and has assured that no hospital in the city has suffered damage. The director of the Mexican Institute of Social Security, Zoé Robledo, has reported that hospitals in the affected states were evacuated, but none suffered significant damage.

Some people traveling on line one of the cablebus (cable car) in the capital were trapped in the transport during the earthquake. “There was a total eviction of L1 from Cablebús and Loop B evicted from L2. There is a lack of electricity supply in the area of Loop A of Line 2. We ask people in cabins for peace of mind.

Are you sure. The electricity supply is being resolved Emergency services on the way ”, Andrés Lajaous, Secretary of Mobility of the capital, posted on Twitter. After an hour, the city government announced that the eviction had been carried out in its entirety “without setbacks or damage to facilities.”