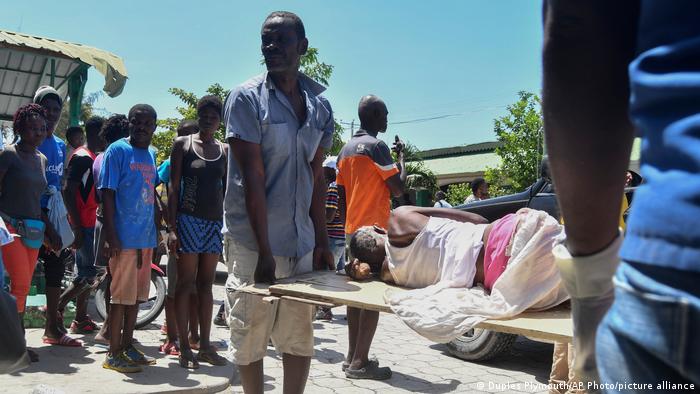 The 7.2 magnitude earthquake on the Richter scale that struck the south and other areas of Haiti this Saturday (08/14/2021) left at least 304 dead and extensive material damage, aggravating the already difficult situation of the impoverished Caribbean country.

The earthquake, which is already part of the 10 most lethal earthquakes of the last 25 years in Latin America, was registered at 08:29 local time (12:29 GMT), about 12 kilometers from the town of Saint-Louis du Sud, with an epicenter of 10 kilometers deep, and it was also felt in the Dominican Republic and Cuba, according to the United States Geological Survey (USGS).

Tonight, during a press conference, Jerry Chandler, director of civil protection said that hospitals in the most affected regions were already facing difficulties in providing emergency care and at least three health centers in the towns of Pestel, Corailles and Roseaux were totally crowded with patients.

The new Civil Protection balance that confirmed another 77 deaths, indicated that at least 160 people died in the South and 100 in Grand’Anse, two of the most affected areas. He also adds that there are 1,800 injured as a result of the powerful earthquake.

Similarly, the US National Oceanic and Atmospheric Administration (NOAA, in English), which monitors the emergence of possible tsunamis around the world, warned of the “threat” of gigantic waves for almost an hour after the strong earthquake was recorded.

The US Geological Survey initially issued a tsunami warning, anticipating possible waves of up to three meters along the coast of Haiti, but shortly thereafter lifted it.

The long earthquake was felt throughout the country and material damage has already been registered in several cities, according to images of witnesses published on social networks.

The situation in Haiti after the powerful earthquake on Saturday is “dramatic,” according to the prime minister of the Caribbean country, Ariel Henry.

In a message on Twitter, Henry called for “the spirit of solidarity and commitment of all Haitians” to face “this dramatic situation we are currently experiencing” due to the 7.2 magnitude earthquake, which struck northeast of Saint-Louis du Sud, in southern Haiti, and that has left several deaths and material damage, according to local media.

Christella Saint Hilaire, who lives near the epicenter, told AFP that “many houses are destroyed” and that “aftershocks continue to occur.”

“The houses and the walls that surround them have collapsed. The roof of the cathedral collapsed,” said Job Joseph, a resident of the city of Jeremie, in the extreme west of Haiti.

On the sidelines, US President Joe Biden authorized an “immediate response” by the United States to the 7.2 magnitude earthquake that struck Haiti.

Biden and US Vice President Kamala Harris held a video conference on Afghanistan with their national security team on Saturday, in which they also received information about the earthquake in Haiti, the White House explained in a statement.

“The president authorized an immediate response from the United States, and appointed the administrator of USAID, Samantha Power, as the senior US official in charge of coordinating this effort,” the brief note said.

Other countries in America and Europe expressed their regret and willingness to help Haiti, a Caribbean nation that was affected in January 2010 by a 7-degree earthquake, which left 200,000 dead, the same number of wounded and 1.5 million victims.