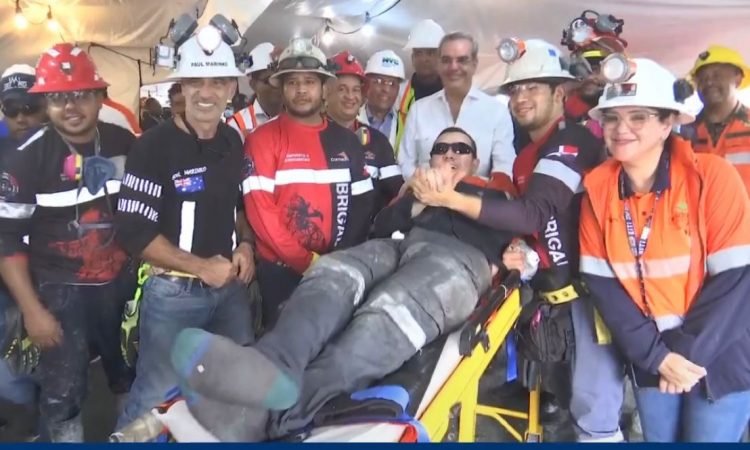 The Dominican Mining Corporation (Cormidom) announced the rescue of Gregory Alexander Méndez Torres and Carlos Yépez Ospina, who had been trapped in the southern area of ​​the mining concession in Cerro de Maimón, Monseñor Nouel province, after a rock slide occurred while they were working in the company on July 31.

The country’s president, Luis Abinader, went to the mine area to receive them and highlighted the courage that both have had to survive. In addition, he thanked all those involved in the rescue work of the Dominican and the Colombian.

The rescue occurred at 11:16 a.m. this Tuesday, August 9, after accessing them through the new diversion tunnel referred to as Rescue Route B, one of the two routes that had been created since the beginning of the rescue plan to reach the point where the two miners were. .

The rescue team was supported by 40 technicians in the areas of geology, geotechnics and mining engineering, including Dominican nationals, as well as those from Australia, the United States, Mexico, Colombia and Peru who provide services to the mining company and who worked in the surface.

Gregory and Carlos underwent a medical evaluation upon reaching the surface and were transferred by air to the Dr. Ramón De Lara Teaching Military Hospital, FARD, for a more exhaustive review of their health status.

Likewise, it was reported that they continue with mental health care to provide support for the isolation process they experienced.

Paul Marinko, president of Cormidom, thanked the miners and their families for the patience and trust placed in the rescue efforts, while applauding the efforts of all the experts who worked tirelessly to bring them to the surface alive.

He also thanked the Government of Canada, the Machines Rogers International team, the international volunteers and mine rescue experts from Colorado in the United States, from Australia, where Cormidom’s headquarters are located.