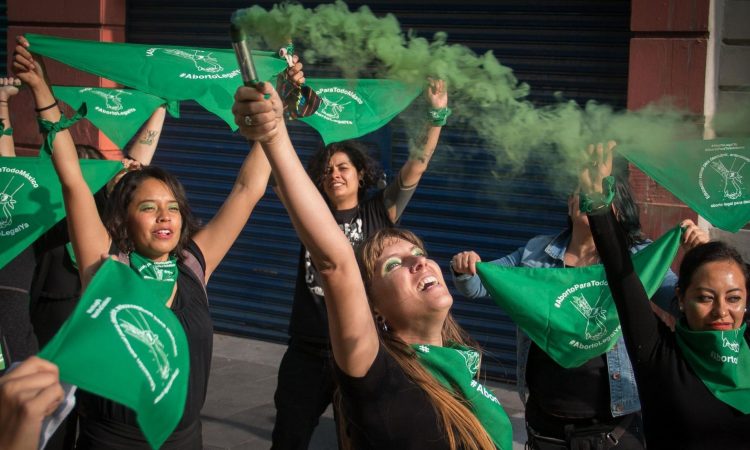 The Supreme Court annuls the prison that punishes the voluntary interruption of pregnancy in some states of the country and sets a precedent for the entire nation.

The Supreme Court of Mexico has decriminalized abortion after a historic decision voted unanimously by the full ministers. “From now on it will not be possible to prosecute any woman who has an abortion in the cases considered by this court,” said the president of the Court, Arturo Zaldívar. It is, he added, a “new route of freedom, clarity, dignity and respect and a great step in the historic struggle for equality and the exercise of their rights.”

The Mexican justice thus opens an expeditious way for the voluntary interruption of pregnancy, a very unequal practice throughout the country, where only four States of the 32 have legislated a law of time limits. In the rest, they are handled with restrictive norms that hardly contemplate the risks for the mother, the malformations of the fetus and the cases of rape as non-punishable causes for abortion. And they are not always fulfilled.

The abortion activists have today one of the most celebrated days in their fight for this matter; the green scarves have flown in the street. Mexico lags far behind in the regulation of the interruption of pregnancy, which has been resolved with patches through judicial decisions over time, with which some regional regulations were declared unconstitutional.

Today, again, justice has contributed to advancing in an area in which the federal government refuses to legislate so as not to open spaces for “confrontation”, as the president, Andrés Manuel López Obrador, has stated on one occasion. Although he has not declared himself against abortion openly. Women “and pregnant persons”, as the judges have constantly referred to them in their votes, will no longer be criminally punished at any time for having an abortion in Mexico. “The Court thus demonstrates, with facts and judgments, that its only commitment is with the Constitution and with Human Rights,” Zaldívar said.

The ministers of the Court have debated for two days actions of unconstitutionality that came from the States of Coahuila and Sinaloa, very severe with the interruption of pregnancy: in one of them, abortion is penalized with imprisonment of one to three years, and another is shielded with a rule that protects the existence of life from the moment of conception.

The decision of the Court has been based on the autonomy of women to decide on maternity, beyond other concepts about prenatal life. “Talking about an idea of ​​life goes beyond the law and a Constitutional Court cannot support its decisions in particular and subjective opinions, but rather universal ones,” said Minister Margarita Ríos Farjat.

And she added: “The grip of criminal law to sanction is not the power of the legislator but of Human Rights, the rest are sophisms that cloud the problem of women.” What the States must take charge of is guaranteeing public health and security ”, she added. “The threat of imprisonment on women and stigma is banished,” the minister who presented the bill that was voted on today, Luis María Aguilar Morales, later said.

The plenary session has also declared invalid an article of the Penal Code of Coahuila in which rape within the marriage or the couple is less penalized than in the rest of the cases. On this, too, unanimity has been achieved.

The great step taken today in Mexico, a country of deep convictions not only Catholic, but of other even more conservative religions with these practices, no matter how secular in its constitutional and historical precepts, places it in the line of legal modernity that they have reached other nations. “With this ruling, the Supreme Court of Justice draws the line for the debate in the States to move towards decriminalization,” says Rebeca Ramos, director of the Information Group on Chosen Reproduction (GIRE), a feminist organization in favor of abortion.

The message of the Court is forceful and forces Coahuila to change its legislation so that abortion is not considered a crime. Women imprisoned for this reason should be released immediately and those who are serving a similar sentence in other States may be protected under this criterion.

Very celebrated worldwide was the right to abortion legislated in Argentina in December of last year. Mexico could not be left behind and it is expected that this judicial decision will lay the foundations for future legislation in the States that do not yet have them. Mexico City went ahead in 2007 with a law of terms that establishes 12 weeks to interrupt the pregnancy without having to give explanations or reasons. They have been followed by Oaxaca, Hidalgo and Veracruz. In 13 years the approach of the Court has radically changed. Pushed by the increasingly strong feminist movement in the country.

This Tuesday’s ruling is a clear example of what it means for women’s rights to apply the gender perspective in the decisions of the Court. If in 2007 it was discussed whether local congresses had the power to decriminalize abortion, in 2021 the discussion has revolved around the right of women to decide about their own bodies from sexual and reproductive freedom. “Today’s decision opens the door for other Latin American countries to take the discussion forward, following in the footsteps of Argentina and Mexico, contrary to restrictive Texas legislation,” says attorney Paola Zavala Saeb.

Across the country, between 750,000 and 1 million clandestine abortions are performed each year, and a third of them result in complications that require urgent medical attention. Thousands of women lose their lives with home interventions or arrive bled to hospitals, where they do not usually find the understanding of health personnel, fearful that the State in question will charge them for facilitating abortion. Conscientious objection is something that is also being discussed these days in the Supreme Court.

On July 7, the Court declared unconstitutional the existence of a specific term to abort in the case of rape, and forced the State of Chiapas to modify this point in its legislation, by virtue of which, in 2018, it was prevented the termination of pregnancy in a 17-year-old girl with cerebral palsy. The gestation had already completed the 90 days dictated for it.

Mexico has recently reformed its judiciary. Now it is enough with a decision of the plenary session voted unanimously to establish jurisprudence, where before five similar rulings were needed. That is the reason why today’s decision is considered historic among those who have defended that a woman is free to decide on her own body in the event of an unwanted pregnancy. The magistrates have taken into account the tremendous situation of violence in which women develop in this North American country.

The Minister President Zaldívar, has ended with a call to the judges of all the instances of the country to follow the criteria of the Court to dictate sentence in the same sense, which reinforces the path that is being opened today in the country. Added to the above is the arrival of Olga Sánchez Cordero to the presidency of the Senate. She is a former Supreme Court magistrate and a convinced pro-choice, she could have an important role in the development of federal legislation in favor of the termination of pregnancy, in line with the words of the highest court.